Currently in ABP stable for Chrome
as well as in ABP dev(WebExtension)for Firefox Nightly (which is more similar to ABP for Chrome)
when you click the ABP toolbar button and so the menu appears,
below the blocked ads counters "x on this page, y in total", there is a "Share this number" text and social media buttons,


My feature request is to add an option to hide the "Share this number" text and the social media buttons, from the ABP toolbar button menu.
For reference, ABP for Firefox previously (before the recent builds for converting it to WebExt) never had this text and buttons in its toolbar button menu.
I understand their purpose, but I'd like to have to option to hide them.
I indeed follow ABP account on twitter (and gladly RT various interesting tweets by ABP), but I don't want to share the ABP statistics in any social media platform, as it would most probably annoy my followers:
by posting something like "I blocked over 9,000 ads and trackers thanks to Adblock Plus. adblockplus.org via AdblockPlus" in Twitter it would definitely seem like an automated message to my followers,
rather than something I'd personally write in order to express my support to ABP.

And, yes, as mentioned here

one may click "Ads blocked" (to collapse it) and that section will be "invisible".


Here is a screenshot from ABP stable for chrome and a mockup I made with my suggestion: 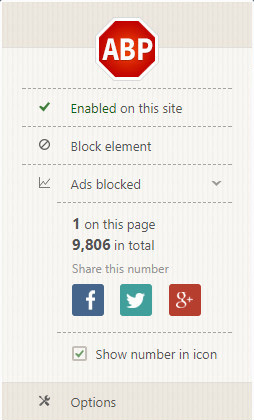 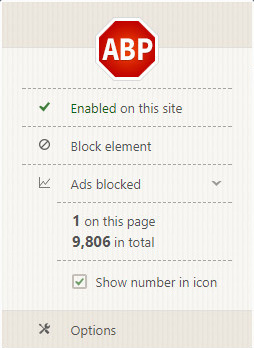 I've opened a ticket for this: https://issues.adblockplus.org/ticket/5613

Return to “Adblock Plus development”